A brush discharge is a type of corona discharge that takes place between two electrodes embedded in a non-conducting medium (e.g. air at atmospheric pressure) and is characterized by non-sparking, faintly luciferous furcations composed of ionized particles. Brush discharges can occur from charged insulating plastics (for example polyethene) to a conductor. The maximum energy associated with brush discharges is unlikely to exceed 4 mJ. Such discharges may be incendive but are less likely to cause ignition of a solvent-air mixture than an electrostatic discharge between two conductors. A spark discharge is another form of electrostatics which occurs between two conductive bodies carrying different potentials.

Part of plant after a dust separator which should contain dustfree air.

Inlet side of a dust separator containing dust laden air.

An arrangement consisting of two gate valves with a coupled operation such that one of the two valves is always closed. In this way the propagation of an explosion from one vessel into another can be prevented. The valves must be automatically stopped in the event of a fire or explosion to prevent the transmission of burning material.

Effectiveness as ignition source for mixtures with air of ...

Mixture of combustible dust and air through which burning completely propagates after being ignited.

Protection measure which prevents the transmission of an explosion from one part of the plant to another (isolation can be effected wilh explosion-prool rolary valves, extinguishing barriers, rapid-action gate a barrier valves or explosion diverters). 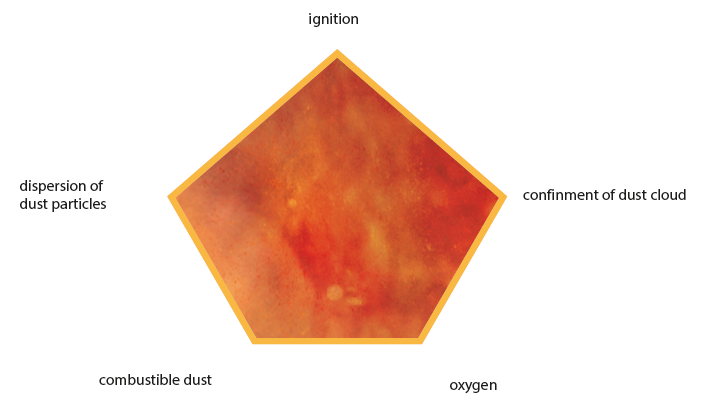 Explosion suppression detects an explosion at the very beginning and interrupts the flame propagation through the rapid dispersion of an extinguishing medium. The build-up of an unacceptably high pressure is thereby prevented and the explosion limited to the inside of the protected vessels. The prerequisite for this measure is a shock resistant design for the anticipated reduced explosion pressure.

Protection measure in which the explosion causes the opening of a vent which has been sized such that the pressure and/or burning material can be released to prevent the pressure rising to above the vessel design pressure.

Special design of rotary valve (number of rotor blades as well as their thickness and gap width) which prevents the propagation of an explosion in the pipe. The rotation of the rotary valve must be automatically stopped in the event of a fire or explosion to prevent the transmission of burning material.

So-called Quenching Devices release the explosion via a rupture disc into a filter system. This filter, preferably stainless mesh, retards the flame and contains dust. Explosion pressure and temperatures are reduced to a negligible level outside the device. These explosion traps allow safe venting of Dust Explosions indoors.

Measure to prevent the propagation of an explosion from one building to another (e.g. by using automatically closing fire doors, gas tight seals, explosion doors etc.).

Measures which must be taken to ensure that the plant remains operable and in its design state (e.g. cleaning, oiling and greasing etc.). Maintenance should also include control and evaluation measures to identify any deviations from the intended design of the plant (e.g. Management of Change procedure).

Lowest spark energy from a capacitative circuit which is sufficient to ignite the most ignitable dust | air mixture under defined test conditions. 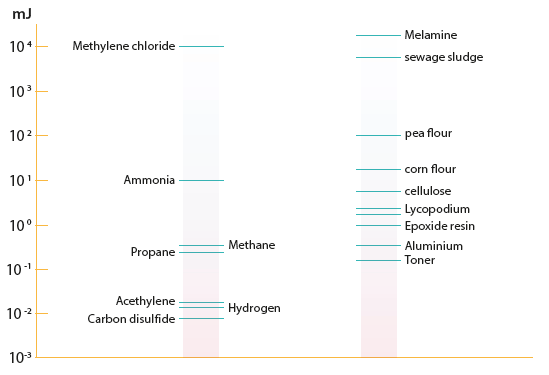 Filter system which is fitted to the clean side of a main filter to prevent the formation of a dust cloud in downstream equipment (e.g. fan) in the event of filter bag breakage or other failure.

A valve which is automatically closed by the pressure wave from an explosion such that the propagation of the explosion in the pipe is prevented. These are often only effective against an explosion coming from one direction.

Rapidly closing gate valve which prevents the propagation of an explosion through a pipe. The valve can be actuated by either pressure or a flame sensor. The rapid-action gate valve is also known as a "slam-shut" valve.

Glowing, i.E. flameless oxidising reaction in deposited dusts. Smouldering agglomerates (or nests) can lead to self-heating or can act as an ignition source.

System which is able to detect sparks and glowing material and to extinguish them by triggering an automatic extinguishing barrier thus preventing their transmission. Most often used: Water (mist) injection.

Shaping the future of industrial explosion protection and fire safety.